This week’s incident at the Alamo Drafthouse tugs at my heartstrings. 😉

NSFW: She Texted, So We Kicked Her Out

For those who don’t want to endure the NSFW video and blog, here is the gist:

And now, for the back story as it relates to me/us.

When E and I started dating, I mostly refused to go to movies. We went to a few coveted faves, but each time, I was disappointed, at the very least.

One time (after we were married), when out with friends to see Madagascar, I made a big stink…with good reason.

The punk-ass[2] kids—there were ~6 of them—behind us wouldn’t shut up.

He followed me all the way to our theater where I dramatically pointed (not unlike the Evil Monkey from Chris’ closet). 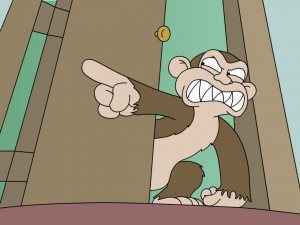 He dragged the hoodlums outside for a good ten minutes. When he did escort them back in, it was to the front row and they were perfect angels for the last (what? maybe 20 minutes at this point?) part of the movie. He must have verbally beat them within an inch of their lives.

Grownup: 1
Punk-ass kids: 0
Cinemark Theater: 0 (He gave us a refund and movie passes for the future, which I’m sure E used.)
Friends: 0 (They never invited us to go with them, again. …not that I blame them….besides…)

…I vowed to never go to a movie theater again.
I amended that vow when we visited Beth & Marc in Austin and went to an Alamo Drafthouse. [3]

What is annoying about most of the comments is how the “authors” are completely ignorant of how an Alamo Drafthouse theater is set up or how it works. “Take over our [defunct] theater” won’t work. The reason Alamo is successful is:

I’m still not a huge go-to-the-movies fan, but when we do, we Alamo.

[1] I’m sure that “irate” is an SAT word that she didn’t remember from any prep course in high school.
[2] Scott coined the term punk-ass-kids. A similar group of teens rear-ended him/Jenn at a red light at ~40mph…with no brakes. They were chatting and no paying attention. The brand-new-hadn’t-even-been-home-yet SUV was totaled.
[3] One time, E and some friends coerced me into a Lord of the Rings showing. While I love the movies and seeing them on the big screen, I hate their “cult”. I was all set to sit in the car for three hours until E made puppy-dog eyes at me. I told him this was the last time. Since it was the last LOTR, he didn’t care.