I read somewhere recently that fabric softener is environmentally one of the worst chemicals to have in your home…not because of the harm of the product, but because of how it’s made. They use a lot of terrible/harsh chemicals to produce it cheaply and then use a bunch of other chemicals to cover up the nasty smells. I used to make my own dryer sheets (sponges soaked in softener)…and since I remembered a method of using Distilled White Vinegar (for the same results but without any smell), I started “the Googleing”.

I found this recipe for softener. Other similar recipes add baking soda, but I’m going to try to skip that part at first. I can always add it in.

In the search, I also found this nifty little site: Being Creative to Keep My Sanity. She made laundry detergent, dishwasher detergent, and some other crafty goodness. The ingredients for these two overlap, so I was off on an adventure. (And, with our grocery store in a full-on renovation, what an adventure it was!)

We had these on hand:

If I make all three, I’ll eventually need:

Except where noted, all of these are at most grocery stores.

Now, if this were all me, I’d have bought all the stuff to make all of it and made a day of this. It’s a BYE week for both Miami and A&M, so what else is there to do on a beautiful Saturday when I don’t have a wedding? However, E is more than skeptical. He’s willing to try this, but has very low expectations it will work. The funny thing is that I do the laundry and dishes most of the time, and he doesn’t even like fabric softener. So, why should he care at all, right? 😉 Anyway, Ms. Creative Sanity swears these are both better and cheaper…and then there is the environmental impact, so I’m going to try.

E & I did our normal thing and compromised. (You can translate this to “she’s crazy, so he brought her down a little closer to Earth” if you’d like.) I’m only making the Laundry Detergent since that’s what we’re almost out of. I’m also making a half batch since the bars of soap were so cheap and I’d only be wasting cheap ingredients if it’s a big ol’ FAIL.

Organize the stuff and take a pic for the blog! 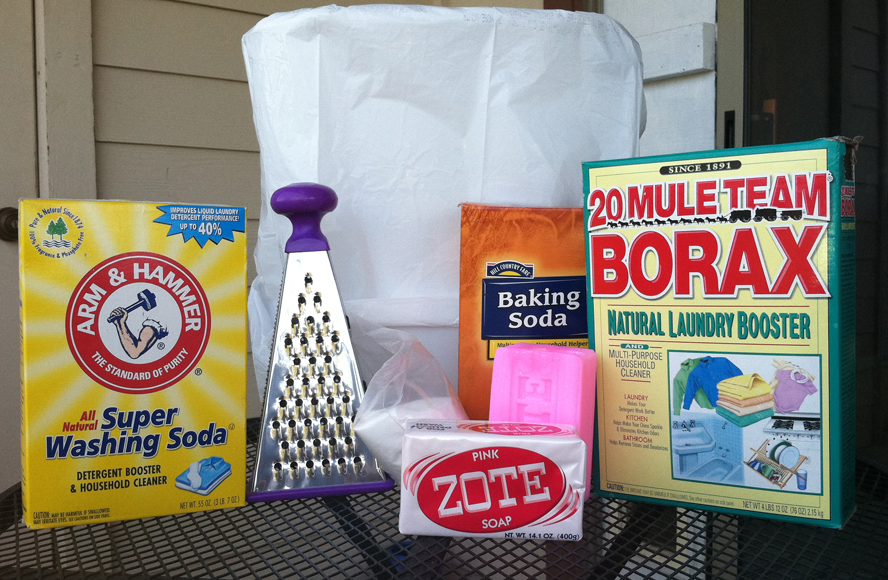 Grate the soap bars. I expected this to be difficult, but the soap is surprisingly soft. I counted grates for half a bar, ~600 on a new, medium-sized grater. So, 1800 for this batch, 3600 for a full batch.

I had a paint stir to mix, but it was too “slow”, so I just dug in with my hands and mixed it like meatloaf.

~15 minutes from set up to storage

Blogging…at least 30 minutes of time. Way longer than making the stuff, but also part of the fun! 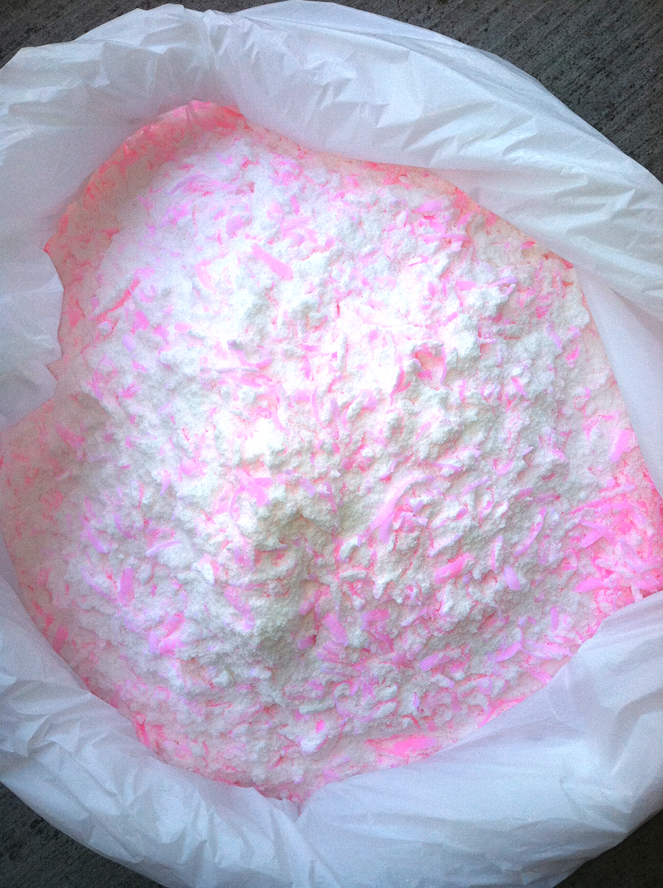 It smells great and isn’t overpowering. I can’t wait to try it out! It’s very strong for cleaning…and only takes 1 Tablespoon per load.

If this works we won’t buy laundry detergent for a very long time!

According to Google Shopping:

E likes the smell and was surprised at how much cheaper it was, too. He’s already less skeptical than before!