Day 2 of our mini-vacay brought us much fun!

After a late night of hot tubbing, we slept in. Actually, I slept until about 8am when I could no longer breathe. I blogged and wrote our Yelp reviews from the day before; E was up by ~11am. We ventured out to have some lunch. The Leaning Pear was too foo-foo for E and a too carnivore for me (but the Fried Green Tomatoes sure were good). It was just lunch, so we were fine. It was nice to see that they make an effort to use local farms and organic ingredients. I made a note to blog about the differences between vegetarian/vegan and organic and raw. Many assume those “land” among the others. This is not the case.

Next, we hit the “other side” of the street to patronize the businesses we missed on Day One. A couple of them were weak. They need a secret shopper in this town to tell some of the business owners that the “perfume” of the business is too strong. :/ I will say this about Wimberley, they certainly include the “girly” in any girl. From petticoats to jewelry to wine-oh-MY, they reach the BFF and Girls-gone-not-too-wild weekend crowds.

We finished shopping just in time to leave for our Zip Line Adventure Tour. Getting there early, waiting to gear up, and “Flight School” was brrrrrr cold on the windy day, but the rides were well worth the effort. Once we got properly geared, the rides were super fun! And, now that we’ve been on one of the Adventures, we are eligible for a night tour complete with glow sticks! We also learned there is a zip line tour in Austin, so now, we’ll need to check them out. The whole event was well worth the price of admission and the red wind-burned cheeks on this blustery day.

It would seem that riding a zip line would be lazy work, but there was a lot of hiking and other effort to the whole Adventure. After the tour, we headed to a local fave, Kate’s Place, for supper. I was lucky to find several vegetarian items that could easily be made vegan. Our food was delicious and the service was impeccable. The funny part of our visit here was the group of four grandparents (three women and one man, apparently all just friends) who were celebrating the end of the Thanksgiving weekend and that all their grandchildren finally went home! LOL! E and I just grinned to each other when we heard them. Ah, problems we’ll never have!

After a fine meal, we drove back to The Junction to visit the Devil’s Backbone Tavern. I had a couple of beers, we played shuffleboard, and we chatted a lot with the bartender (Lizzie) and some incredibly friendly locals, including one guy I’m practically certain I know from working at Texas A&M. Who’d’ve thunk?

Our late evening consisted of trying to get the hot tub, well, hot, while I wrote up this diddy about our day. It’s a great day to be a Luza, except for that failing hot tub thing. 🙂 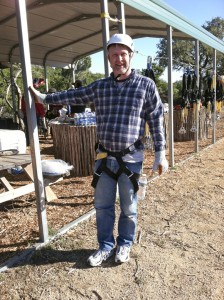