Backstory: We got a new car about seven weeks ago. We were due for a service but the site showed a huge sale on 2013 models. We upgraded to some snazzy new features that our 2011 model didn’t have, got a smaller payment, and got back into warranty, too. We got the Zoom-zoom Mazda loyalty discount, again. It was truly a win-win-win-win….and a no-brainer decision.

…and then after a little break at Opal Divine’s, we headed home for the evening. The sun was very bright just before sunset, so I reclined my seat. We were sitting at a red light when I felt immediate back pain and E’s glasses flew off his face, folded “closed”, and landed in the floor in front of my feet. We also had two gift cards and a name tag in different “cubbies” and they went all over the car.

A woman who spoke so little English she didn’t know hazards/flashers/blinkers or lights hit us with no brakes. Her excuse: the sun was in her eyes. Well, then brake. I feel a little bad for being mad at her, but did I mention the car is brand new? She knew better than to ask/tell me anything. Weird thing was: the very moment was likely the angriest I’ve ever seen E. …but she politely asked him if she could call her sister. He told her to call whomever–with an implied “the fuck”–she wanted.

The accident comes eerily close to the 1-year anniversary of when LG gave her life for me. State Farm was on top of what they can do until Geico connects with them; Dusty called us this morning just to make sure we were okay and to see if we needed anything.

Of course, the pictures don’t do it justice: 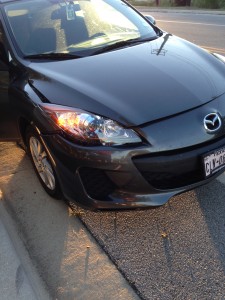 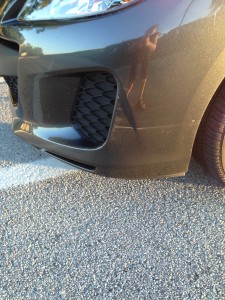 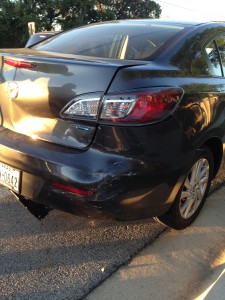 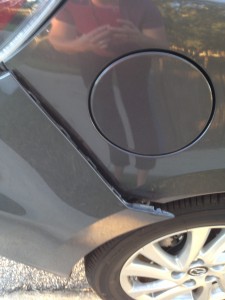 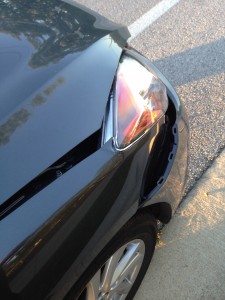 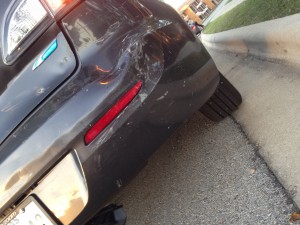 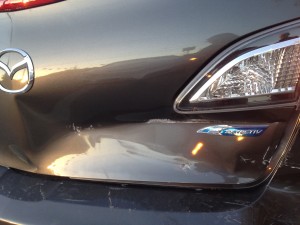 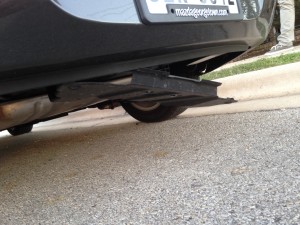 I’m sure we’ll know some kind of damage number by Friday or Monday depending on how busy the body shop is. Judging by the parking lot, I’d say Friday. There were a lot of cars ready to go home. 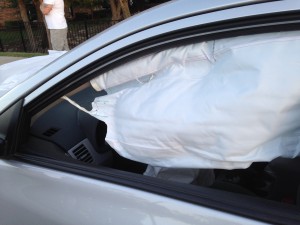 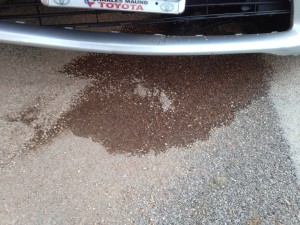 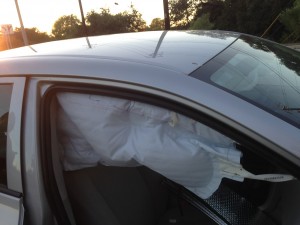 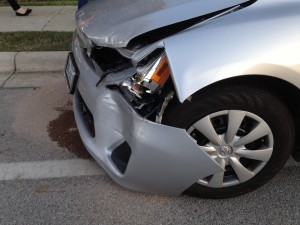 All her air bags deployed…so I guess she hit us at at least 25-30mph. It sure felt like more than that. Her side airbag/curtain did not deflate. I had to hold it out of the way tot turn on her hazard lights.

The car in front of us: 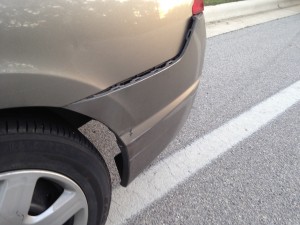 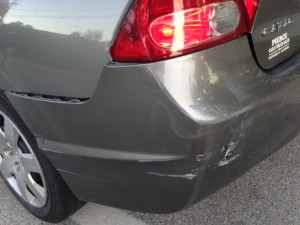