My little car, “LG” or “Elle Gee” gave her life for me on Saturday afternoon. I had been out running Hallowe’en errands and was crossing through the last intersection on my way home when I was hit by a Chevy 1500. I did a 420+degree flat spin into a Honda CRV waiting to pull out from that intersection.

[I was declared at fault, and] “LG” (Little Green car) didn’t survive. 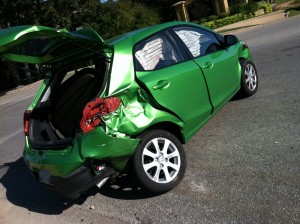 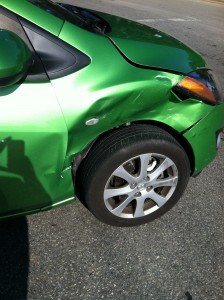 passenger fender “bounced” off the CRV 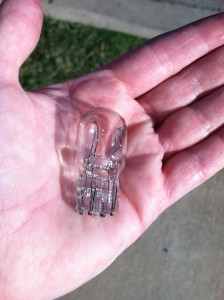 physics are weird: a lightbulb (and its filament) survived!

If you are going to buy a small car, consider the Mazda2. She was hit at a full no-brake force of 60MPH, never rolled/flipped, and kept me safe (save for a seatbelt bruise) during the whole ordeal.