The nice lady who owned our home before us had very different tastes than we do. She had florals and valances and 1200 square feet of pink. She was kind to leave us the sheers and valances that fit the first floor windows. It was just one less thing we had to worry about as we moved in.

Here we are coming up on four years and we still hadn’t bothered (much) with the windows. I was ready for curtains. Pinterest inspired me. But, buying them would require ordering for the 13-foot tall pair of windows. I can’t even imagine what that would cost. Certainly, it would be more than E & I are willing to pay for “decor”. So, I decided to make them. I found a sewing studio in our neighborhood. I found 39 yards of fabric (during a huge sale) that was light enough for 13′-long panels. I found affordable double rods at Ikea. It took me a whole day at the studio just to measure thrice, cut, and begin to iron the fabrics. After another day and a half at the studio, they were all sewn. We hung the rod and the curtains for the wide windows. I’ve been using them and love how they a) cut the glare for TV watching, b) add some warmth to the room, and c) match our style more than anything we could buy. My favorite thing is how they nest perfectly around one tieback so it’s quick/easy to open them part or all the way.

This week, while E is off, we borrowed a ladder from the HOA and hung the rod 13′ up the wall. So, the living room is now completely curtained. We can now make that room movie-theater dark during the brightest part of the day. We’ve already had another movie marathon: Jurassic Parks/World to go with the corresponding Lego game we got for xmas! 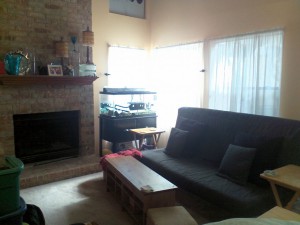 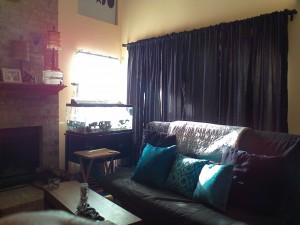 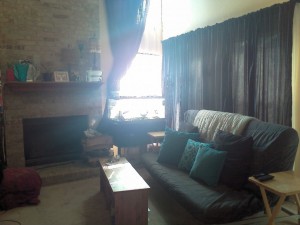 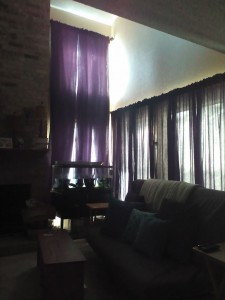 These images were taken on a very sunny day during the brightest angle of the sun; yay for winter in Texas!. It’s much darker than it looks (the camera picked up as much light as it could); look how dark the pillows on the couch are. They do quite well during the “worst” conditions, so the rest of the year will be quite nice.

Also, it will be easier to braid/close them next time we do a deep clean of Turtleor’s tank. His hoses are behind his tank and they get in the way of curtains hung that far forward on a double rod.