Many of you will remember our Bryan neighbors, Paul & Victoria Springer. They used to be as into Hallowe’en as we were so on the years when our parties would sync up, we’d all wander to their party and their guests would all wander over to our’s. They had the keg of beer, we had queso and kitty litter cake. Win-win and much fun. Paul spent a couple of years teaching at West Point while Victoria finished some courses and started her research. Eventually, she moved up there with him and then they re-located to Alabama.

Well, Paul wrote a book and it’s currently in pre-sales and scheduled for a March release. 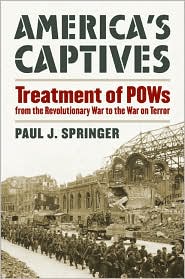 America's Captives: Treatment of POWs from the Revolutionary War to the War on Terror by Paul J. Springer