For two years, we went with college kids to the Gila National Forest to do trail construction. We worked on the Continental Divide Trail which goes from Mexico to Canada. It was a great way to spend a few days of work advising students. We hauled a lot of flat rocks to build the trail. One year, the students gave us a flat rock they had all signed. And, the year we got married, they gave us a rock that says “Okay” on it. (Because in the cliff dwellings, places you aren’t supposed to go are marked with a rock that simply says “Don’t” and at a high altitude, we all found that hilarious.)

These last ~2 weeks have felt like those trips. We saw an ad on Craigslist: a guy in our neighborhood was giving away rocks. The only catch is you had to come get them. These aren’t the flat rocks like we used for the trails, but are almost like river rocks. His large lot has them in corners of the front yard, across the front edge (super nice when guests visit and have rocks instead of grass when getting out of the car). They also run all the way down the left side, all the way across the back, and half way up the right side. In most places the rock beds are 12-15′ wide, but in some places they are closer to 20′. He’s been babysitting people right and left who will come take the rocks. He’s been kind enough to let us come multiple times since we don’t have a truck. Well, this week might be our last trip. The beds I planned and the “gap” past our patio are looking great. 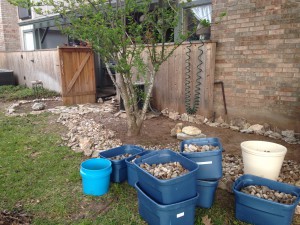 Tubs of rocks. We can fit four in the trunk. We hauled 7 of them on Tuesday. 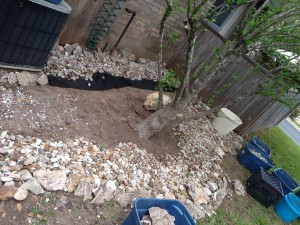 It’s a slow process. It takes me all 4-5 hours to unload all the rocks. 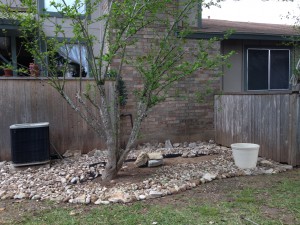 The big side is almost done! 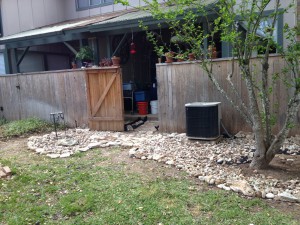 From this angle, it looks almost finished. 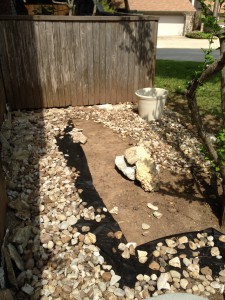 But up close, you can see there is much left to do. I think it will take one more trip. 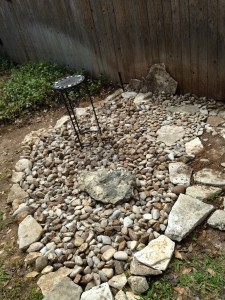 The little side is all done. The patch of discolored ones against the fence on the right are all “flat” rocks that will fit under the gate when it swings open.

We’ve had tons of compliments from curious neighbors. I’ve gotten free rocks (the big stacked ones), free hyacinth seeds (which will climb the chimney), free tools (two sanders, a caulk gun, a vise, and even a croquet set), and met so many of our neighbors. We’re going to put a wisteria in the pot, since it’s “against the rules” to plant it in the ground.

There will be more pics when it’s finished!