In the fall of 2009, after we sold the house in Bryan, we had to trade in my truck before it left me/us stranded. We got a cute little “hippie”/Austin car that more than 2x the gas mileage Baby Truck did. We named her BB…inspired by our favorite downtown hangout, Betsy’s Bar.

After being the official photographer at a baby shower [1], I met Beth for dinner/beer at North by Northwest restaurant/brewery. We were there for 4.5 hours catching up [2] and left at ~10:15. Being only a few blocks from our apartment, I never got on the highway.

I was on the feeder/service road, toodling along, when I felt/heard an impact. I was instantly knocked over to the driver’s side and slid for–at my best estimation–about 160 feet. I rolled the passenger window down, and some guys–including a cop–were already there to help me out of the car. They reminded me to turn off the engine–one of those things you forget when you’ve just been in an accident; I couldn’t even hear it running–and asked me if I was ok, could I stand up, etc.. I unbuckled my seat belt and stood on the driver’s door. I noticed that the air bags didn’t deploy. I stood on the headrest, hopped up onto the edge of the door frame, swung my legs over, and used the guys’ shoulders to hop down. I turned to look at the other car; it was black.

As soon as I stepped onto the curb, I was greeted by the other driver and his girlfriend-of-10-days. They were quite grateful that I was ok and kept saying things like, “I’m so glad you’re not dead,” and “I’m so glad you aren’t hurt.” I called E to tell him that I was ok, but that BB wasn’t and told him where I was. The driver’s name is L. He’s a sweet guy and hugged on me like I was long lost family. I cried at the mention of his name and explained that my dad was also L. If you are ever going to be in an accident, you want it to be with a guy like this. He was genuinely concerned.

After the firemen/EMTs and EMS/paramedics checked me out–all I had “wrong” was a burn on my wrist from where my arm must have hit the gear shift–L and I traded info and talked about how we both have good insurance and that they will take good care of us and make everything right.

After a few days of dealing with the towing company, storage yard, adjuster, and other “admin” stuff, we learned that the car was declared “totaled”. We went to the body shop and got the rest of our (few) belongings out of BB. I’ve always had a pretty emotional attachment to the cars I drive, so I said good-bye and thanked BB for absorbing all impact, sacrificing herself, and keeping her carriage strong to protect me. 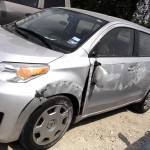 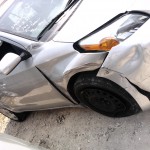 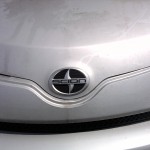 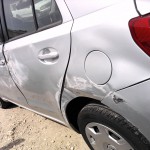 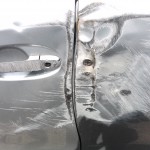 Even days later–as I write this–I’m quite sad she’s gone….

Thank you, BB, for giving your all to save me from any injury. I appreciate your dedication and devotion. I’ll always think fondly of you!

So, now, among the other stresses in our life, we are seeking a replacement for BB. “She” won’t be the same, but we will love her just as much.

[1] Trust me, that’s not nearly as much fun as it sounds, but it was both for money and for a friend. And, some of the images are really cute. I can’t wait to see the book my friend makes for the mom-to-be.
[2] She lives close by, but has an insane schedule, so we only see each other every ~3 months.